And only three to go before the big four years old. I have been informed that there is to be another Totoro cake. Duly noted. Also noted is the likelihood of the cake theme changing according to almost-four-year-old whim.

Someone brought home a medal from the annual preschool Olympics. They don’t give coloured medals out any more (“Because,” the director told HRH, “you would not believe how competitive they get.” “The kids?” said HRH, astonished. “No, the parents,” she said darkly. “You’re really laid back about this.”) but the director oh-so-casually pointed out that someone’s medal was strung on a gold ribbon. Apparently he’s giving the five year olds a run for their money. It’s not that he’s a conscious overachiever, he just throws himself so completely and totally into everything he does and does it with enthusiasm and energy. February was winter Olympics month at preschool, complete with preschool-geared Olympic events in which everyone participated. As HRH has a multitude of Canadian flags Liam volunteered to bring one, which meant he got to carry it in the little parade. I hope someone got pictures.

There’s a new assistant at preschool. She was helping him into his coat yesterday when he reached out and stroked her hair, saying, “You have really soft hair, like my mama’s, except hers is curly.” To which the teachers at preschool, and I when I heard it, all said, “Awwww.” 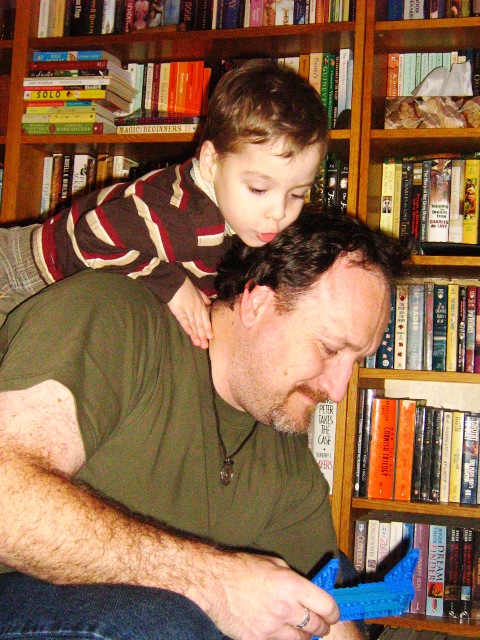 Porco Rosso was the new film he discovered this month, thanks to a deal he has going with Scott. Liam asked if we could borrow The Cat Returns from their collection, and Scott said only if he could borrow Cars and/or WALL*E and/or Ratatouille, as he and Ceri hadn’t seen them. Liam thought about it and decided they could borrow Cars and Ratatouille, but not WALL*E. Which makes sense, since it’s the newest one and he’s still a little protective of it. (Although we are personally stunned at his decision to let Cars out of the house.) Then he decided he had to go over to their house in person to effect the trade, which was fun because he ran around and around the central part of the house, and with Scott explored the little section at the top of the stairs where the boards lift right out of the floor to reveal a little hidey-hole. He also decided that he’d have to go back and watch Cars with Scott on the huge television they have set up in the basement. When we told him it was time to go he declared that he wanted to stay forever and ever, which was very sweet indeed, and quite remarkable because the cats wouldn’t have anything to do with him.

He seems to have developed a thing about food touching on his place, and sauces actually on things instead of being used as dips. And his big quirk right now is smelling things. “Can I smell it?” he’ll ask if we show him something new or put a plate of food down in front of us at the table. This applies to non-edible items as well like books, cameras, toys, clothes, pieces of paper, and so forth.

Puzzles are the current toy of obsession. He throws them together impressively quickly. He found an envelope of about six twenty-piece puzzles from a book that had gone AWOL, which had no reference pictures, and zipped through them. He also asked for black chalk the other day while drawing on his easel. HRH explained that people didn’t really use black chalk all that often, because you wouldn’t be able to see it on the chalkboard, and got a flat stare as a reply. Emo Preschooler Requires Black Chalk To Express Himself, we thought. 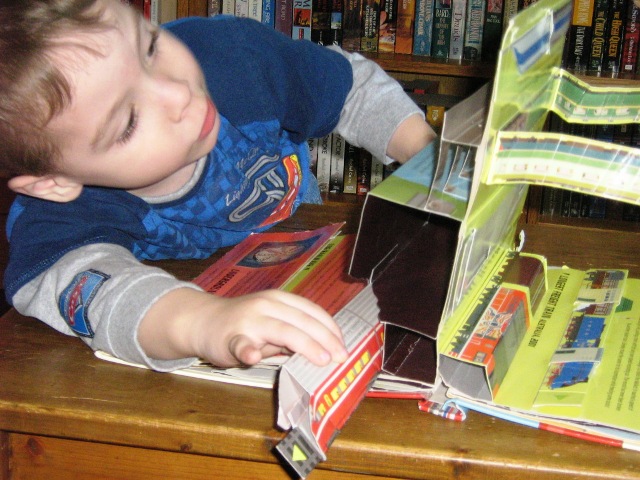 Books this month included yet more train books from the library, in particular an impressive pop-up one with stations and trestles and all sorts of things. And he went through all three of them plus his own Eyewitness train book and pointed out the Rocket in each of them, being very pleased to be able to match them up, too. The other awesome book discovery was Roald Dahl’s The Enormous Crocodile. Hilarious when you are on the verge of four, and so enjoyed that I’ll have to pick a copy up to own. I finally remembered that I owned the four Catwings books, so those are lined up for the next few weeks of bedtime stories because they’re the perfect balance of text and illustration, followed by the Brambly Hedge books. (In my defence, they had been moved about a year ago to a shelf which had space on it, as opposed to a shelf with other children’s books or a display shelf as they’d been kept for years.) 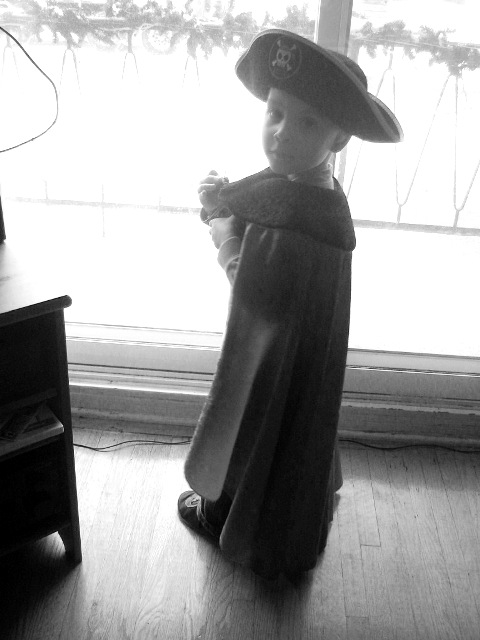