1. I had another prenatal appointment yesterday. Everything is spot-on. My doctor was so excited about me going past the 31-week mark that I had to laugh at her.

2. HRH has finished the stairs to the attic, and they are beautiful. He has also temporarily cleared out all the insulation so we can lay the floor. We have been able to revise the flooring plan because we discovered when he cut through the ceiling that the existing attic floor/first floor ceiling was made with tongue-and-groove strips, solid enough to be walked on. Seriously, this gets better and better; first, actual windows existed up there under the siding, and now a floor? The attic was genuinely designed to be another room that the original owners just didn’t tell the builders to complete.

3. After today, there are only two days of kindergarten left for the boy. He has a kindergarten celebration tomorrow afternoon, where the parents will go in and watch them sing songs and that sort of thing, then they will get certificates, and then there will be cake and juice for everyone. Where did this academic year go? Didn’t he just take the school bus for the first time?

4. As the end of the school year approaches the boy has been bringing home workbooks and folders and artwork. I had no idea they wrote and drew journals as part of their curriculum, but he sat down with me yesterday and read me all his journal entries, about one a week since they began in January, and I was stunned. They don’t teach formal reading or writing in kindergarten, or so they say; they encourage sounding things out and phonetic spelling as steps toward it. This means that yes, there are letters missing and incorrect letters, but the sounds are mostly there. I now have a six-year-old who sounds out every written word he sees with ease, reads above his theoretic grade level, and who does a pretty impressive job of writing words down just from listening to them or saying them. I can read his journal entries without referring to his teacher’s interpretation below. I find this kind of evolution of how to read and write absolutely fascinating. Here, here’s an example from two months ago; I’m giving you this one because I recognised it right away. This is a pretty precise depiction of Ceri and Scott’s basement from where you’d be standing if you paused in the archway into the TV room and saw Scott and Liam playing video games together. I even love that he drew Scott’s computer desk off to the right. 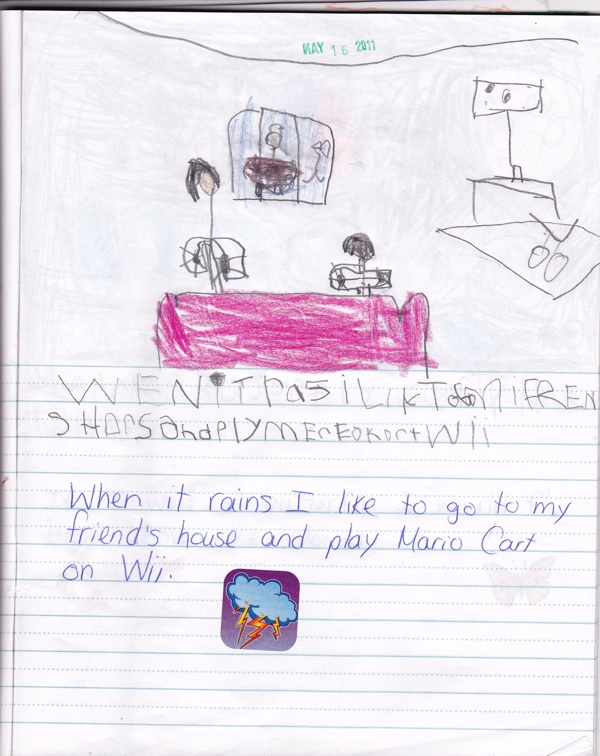 I also love that he wrote and drew about something important to him each time: spending the day with a special friend, building in his Lego City that lives on a board under his bed and is pulled out to play with, visiting grandparents, the best part of a field trip, and that sort of thing. We’re going to keep up the journal exercise weekly over the summer. He seems excited about it, it’s a great way to keep working on practising his letters, and I love the idea of tucking it away in a memento box for him to look at years from now.

(Have I mentioned that I find how kids learn fascinating? I do. I find the stuff they don’t learn just as fascinating. Like how the boy still can’t grasp riding a two-wheeler bike.)

5. I am currently struggling with internal tension about the postal strike. I fully support the CUPW’s right to demonstrate, call for collective bargaining, their requests for proper contracts and the pay scale and benefits they’re fighting to keep, including maintaining pension details for existing and new workers that got hit when the economy tanked. (It drives me up the wall that CP keeps saying mail volume is down and that’s why they’re not agreeing to the union’s requests to maintain what was in their last contract because they’re “unrealistic,” but they’re neglecting to acknowledge that to make up for it they’ve been accepting more paid admail to be delivered over the past few years, which has made up the shortfall in lettermail in both volume and profit. Admail; you know, the unaddressed stuff that the postperson sorts, carries, and puts in everybody’s mailbox that you take out and put right into the recycling box.) The one-day rotating strikes slowed things down a bit, but that was fine. When Canada Post cut operations to three days from five, effectively going to part-time for everyone, it slowed things down more and I chafed a bit, but at least things were still moving. But when Canada Post locked their workers out completely to create a national situation, things went badly for me. I have three (no, four by now) rather important freelance cheques coming to me from the US that are now stuck in the system. They were due to arrive the second week of June at the earliest, and we budgeted accordingly. Now that budget is screwed and have been scrambling to rebalance things; money originally scheduled to go one place is being diverted to go others and things are being left for a later date that ought to be paid now, and buying the last few baby things we need keeps getting shuffled later and later. The attic has taken a hit, too, because we were going to use part of my biggest cheque to buy the initial round of supplies, timed to happen with the beginning of the month-long vacation HRH had booked. (Although things look brighter in that department due to parental generosity, so at least HRH won’t be sitting here off work, twiddling his thumbs and wasting time, waiting for the cheques to arrive in the mail so we can get building.) So yes, things have been rather stressful and unhappy around here money-wise for the past two weeks. And just as bad, important outgoing mail got stuck in the strike as well, like our taxes and my application for cord blood donation, which needs to be received by Hema-Quebec before I get to 36 weeks. The life of a postal service-dependent freelancer is not a happy one. And it really annoys me to read comments like “We don’t need the post office, everyone should go to e-mail billing and direct deposit!” on news articles, because that demonstrates a really poor understanding of how businesses function (and also assumes everyone has internet access, which is also erroneous).

6. The boy went to La Ronde, our local Six Flags amusement park, for the first time this past Sunday, on a free pass with his best friend, her mum, and HRH. They had a fabulous time. I am shocked at the expense of these sorts of things, so a free pass is pretty much the only way it could happen. (Although HRH told me that season passes for a family are less expensive than a single admission for said family, if purchased before a certain date, so we may look into that as a gift to him next year since the boy had The Best Time Ever.) They spent the day mostly in the family ride area, the majority of which seems to have been installed in 2005. I am jealous, because he got to go on the Belgian carousel built in 1885 and bought for Expo 67, which runs on electricity right now but is being restored to run on steam power again, complete with its steam organ: 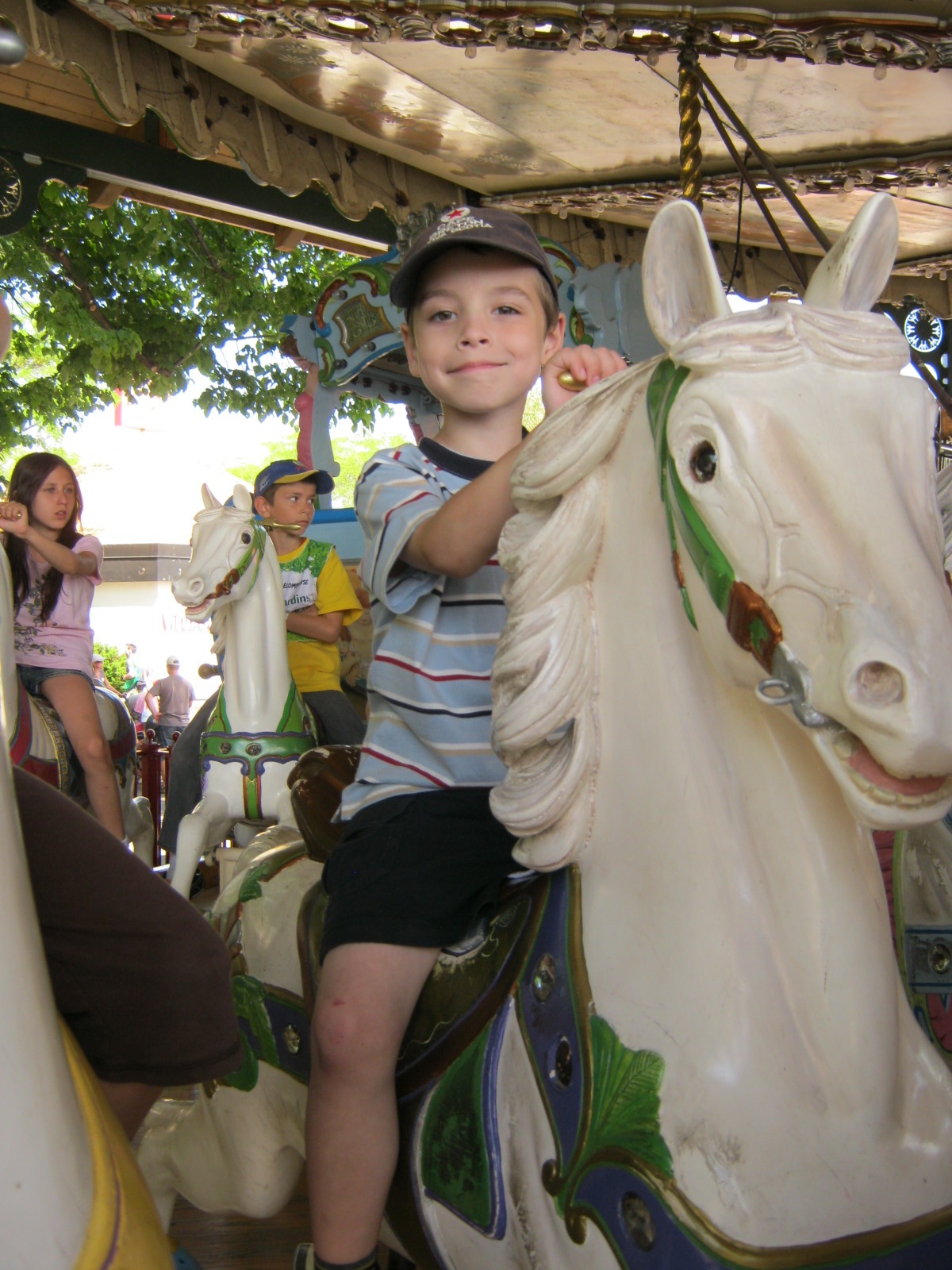 7. Tomorrow is the boy’s last day with his rental cello, then I take it back to the luthier. We couldn’t renew the rental even if we wanted to, with this stupid cheques-stuck-in-the-mail issue. But hopefully practice will be back to normal as of Tuesday morning, because on Monday we are taking that day trip to Ottawa to see secondhand 1/8 cello at a steal of a price, see the newly redone Nature Museum (which we last saw a couple of years ago in the midst of renovation) and also walk past the Parliament Buildings.

8. There’s a post with knitting and spinning and stuff to come, I promise.

I think that’s it for now.